Home › Entertainment › Galactic fun at Disney +: All the facts about the new “Star Wars” series “Andor”

Galactic fun at Disney +: All the facts about the new “Star Wars” series “Andor” 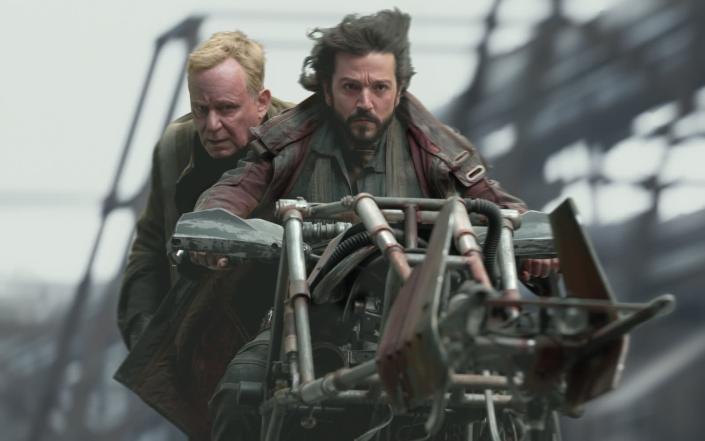 New stories from a “galaxy far, far away”: At Disney +, “Andor” is the next series in the cult franchise. Everything you need to know about the launch of the latest “Star Wars” production is here.

In 2012, a mega deal was arranged: the Disney group acquired all the rights to the huge and popular “Star Wars” universe with Lucas Films. Since then, Disney has ensured steady growth. What began in 1977 with “Star Wars” now includes three trilogies, two independent films and various live-action and animated series – with no end in sight. Just about four months ago, Ewan McGregor celebrated his comeback as a Jedi master in “Obi-Wan Kenobi”, and the next series from the world’s most popular sci-fi franchise is already in the starting blocks at Disney+: Here you can find out everything about the latest “Star Wars” hit “Andor”.

What is “Andor” about?

“A long time ago in a galaxy far, far away,” but I’m sure you already know that. The latest “Star Wars” series follows the eponymous character Cassian Andor – known to fans from the film “Rogue One: A Star Wars Story” (2016) – on the rise from simple thief to hero of the rebellion. The prequel series “Andor” tells how the rebel captain and spy became a defining figure.

The rebellion that has declared war on the Empire is still in its infancy – and Imperial troops want to nip it in the bud. It’s an era of danger and deception as Cassian Andor increasingly realizes he can really make a difference. The galaxy is marked by political intrigues, many people and entire planets are involved in the entanglements.

All twelve episodes of the first season describe events that take place within a year. Filming for the second season, also consisting of twelve episodes, is scheduled to start this year. Then the story should move straight to the events in “Rogue One”.

The most important personnel was quickly clarified: As in “Rogue One”, Diego Luna (“Narcos: Mexico”) will play the main role of Cassian Andor. The 42-year-old also helps shape the production as an executive producer. There is also a reunion with Genevieve O’Reilly. The Irish-Australian actress reprises her role as Senator Mon Mothma. She was not only in action as a sincere politician in “Rogue One” in 2016, but also in “Episode III: Revenge of the Sith” from 2005.

Also in front of the camera were Kyle Soller, Denise Gough, Adria Arjona and Stellan Skarsgård. The latter already knows his way around on foreign planets after his role in “Dune”. The supporting roles also include a German actor, Clemens Schick (“Kidnapping Stella”). There is also speculation about a return of Hollywood star Forest Whitaker as Saw Gerrera – “Rogue One” says hello again.

As showrunner and creator, Oscar-nominated Tony Gilroy is the mastermind behind Andor. He previously wrote the screenplay for “Rogue One” and also co-wrote “Andor”. Toby Haynes, Susanna White and Benjamin Caron directed the first twelve episodes.

When and where can I stream “Andor”?

On Wednesday, September 21st, the waiting time for “Star Wars” fans will come to an end, because then the first episodes can be streamed on Disney +. However, initially only three episodes will be available. The streaming service from Disney currently costs 8.99 euros per month. In addition to “Andor”, the other films and series from the “Star Wars” franchise are also available.

What can fans of the franchise expect?

Disney announced a “new perspective” on the “Star Wars” galaxy, but what exactly makes “Andor” special? As the first so-called “Star Wars Story”, “Rogue One” left the usual paths of episode narratives and introduced characters that cannot simply be pigeonholed “good” and “bad”. Instead of black and white – in this case the light and dark side – there were also characters who were allowed more gray areas. “Andor” probably starts at a similar point. Disney already explained in the course of the announcement in 2018 that the – at that time still nameless – “Rogue One” prequel series wanted to be stylistically based on espionage thrillers.

But not only dramaturgically, “Andor” could also be based on “Rogue One” in terms of content – and throw the other viewing habits of the franchise overboard. It will be the first live-action series under the “Star Wars” label that does not use so-called Stage Craft technology. Usually the same is used for digital backgrounds. But the shooting of “Andor” took place a lot indoors, and large sets were used.

Where can “Andor” be located chronologically?

Even self-proclaimed “Star Wars” experts can get a bit confused in view of nine episodes, “Star Wars Stories” and various series – here “Andor” is classified chronologically. As noted, Andor is the prelude to Rogue One, the film in which the plans for the Death Star fall into the hands of the rebels. This is a crucial turning point in the saga that made possible the events of the first Star Wars film from 1977, Episode IV: A New Hope.

“Andor” is another link between the prequel (Episode I to III) and the original trilogy (Episode IV to VI). The events depicted in the recently released Disney+ series Obi-Wan Kenobi predate Andor. The animated series “Rebels” is set in a similar period, but it remains unclear to what extent the timelines overlap. “Star Wars” films and series that play far before or far after Cassian Andor’s journey are deliberately left out here.

During Cinema Con, Paramount confirmed that a prequel to “A Quiet Place” is on its way. The “Pig” director’s prequel will hit theaters in September 2023. Michael Sarnoski, most recently with Nicolas Cage’s film “Pig”, has been hired to direct the next part of the “A Quiet Place” series. The title of the new film […]

“Heartstopper” gets a second and third season on Netflix

Author Alice Oseman is allowed to continue remaking her comic book novels for the television screen, after the first season quickly managed to capture the hearts of both viewers and critics. Netflix has just released a really happy Friday news for all fans of the teen series “Heartstopper”. The streaming service announces that the British, […]

The screenwriters for “Eternals” are behind the project “The Executioner”, which is described as being in the same spirit as “Knives Out” as well as “The Lord of the Rings”. The roles continue to fall in for Jason Momoa. Deadline reports that the “Aquaman” actress, who has recently been ready for big movies like “Fast […]